sandisk cruzer 16gb I cannot Format has turned into a raw

sandisk cruzer 16gb
I cannot Format has turned into a raw.

Anyone able to help me if I hope I find the flash firmware. I think it’s the only solution and Thanks

Wow. Have you tried setting formatting this to Fat32?

Kuerten - If you had looked at the pictures the OP linked to, you would have seen he has attempted to.

Nabel_sweed - It appears as though the drive has gone belly-up. Whether or not it has to do with you not “safely ejecting” the drive before pulling it out of the USB port I don’t know, but you will probably want to either return the drive to your dealer or contact Sandisk Tech Support about a warranty replacement.

Thanks for help.
Unfortunately, I do not have a guarantee of Flash. USB stick may crash after you try to install it by Windows 7 (Windows 7 USB DVD Download Tool), but Suddenly stopped loading and became so.

I got mine working (which had the same issue as yours) by removing the Launch3 feature on the sandisk, when program removes itself it reformats the drive so it becomes a storage device only. Any question feel free to ask me.

This thread is talking about the SanDisk Cruzer Flash Drive, not MicroSD cards. In fact, this entire board is for the discussion of flash drives. There is a separate board for memory cards.

"I was forced to eject even though it said programs were using the files (which was NOT the case because all programs and all files were closed)."

You couldn’t reboot the machine? That would have ensured your SanDisk wasn’t being used by anything before you removed it.  Are you sure none of the machine’s antivirus app(s) were not scanning the SanDisk drive?

"I ran the scan option to repair and recover"

No idea what “It” is.  Or what operating system you were using.

Pulling the USB drive out while it was still in use most likely screwed up the drive’s File Allocation Table.  If the files are important to you I suggest you take it to a local repair shop and see if they can recover your files for you.

I don’t know if this is the exact place.But SanDisk Cruzer Blade pendrive is not working.Windows says you need to format before you can use it.In my computer, it just wont open and displays same error.

On trying to format, Windows says, it cannot format it.

Quick and full format , both failed.

SanDisk Guru huh? I’ve been googling a problem with my Sandisk USB for half and hour and even I know that the launch feature referred to here is SanDisk U3 Launchpad. There’s a removal tool on the SanDisk website because it’s a common problem when trying to make create a bootable USB.

“There’s a removal tool on the SanDisk website because it’s a common problem when trying to make create a bootable USB.”

Apparently a problem only for people who don’t know what they are doing.  I have two U3 drives both bootable, both still have their U3 partition.    And the U3 Launchpad menu has the option to remove U3, so no download necessary.

Still think you know what you’re talking about?

how did that happen plzz do mai mayank_noor@yahoo.com

Coz mine is not working properly…either formatting…

Navigate to the following Registry key:

Please note that you may need to create the key StorageDevicePolicies if it does not exist. Select the key afterwards and right-click into the right window. Select New > Dword (32-bit) Value from the context menu and name the entry  WriteProtect.

Double-click the new entry afterwards and change the value from 0 to 1. A value of 1 disables writing to all connected USB devices. If you want to enable writing again you need to change the value of the key to 0. 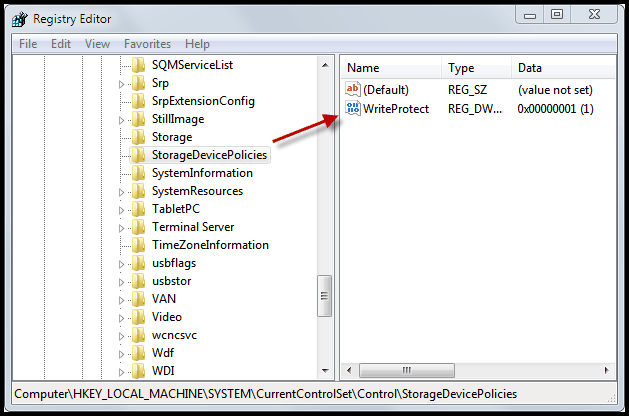 Use two Registry files to enable or disable write protection. You can download a zip file that contains both files here: write protect

This way you can disable write protection with a click on a file, and enable it again when you have copied files to the USB device or format USB device.

But that write protect will only apply to the machine on which the Registry tweak is applied.  On a different machine the flash drive will be writable.  And I doubt that that is the situation with the OP’s machine.

Thanks, this worked for me

I fixed the issue by uninstalling it in the Device Mananger and then unplug to plug in again. As simple as that, and i was back to normal.

Are you still available to help with this issue?

Can you please explain briefly in steps what actually you did…??