Screwed Up My 1st Attempt @ Transferring Music To USB

I’m probably going to go into more detail than necessary, maybe even to an excruciating level, but I’m thinking that’s probably necessary in this case.

My experience using flash/thumb drives is pretty limited. I got tired of backing up everything on CD’s/DVD’s & bought 2 - 32 GB Cruzer Glides @ Best Buy on November 4, 2015.

I use them to back up tax returns, storm chasing pictures/GIF’s/videos, my collection of scans, text files, etc. Approximately 250 different folders, & the drives work flawlessly.  *I also assigned passwords*

Here’s what I see after I insert the drive & click on the ICON that appears on the desktop. Next I click on the SanDisk…ssV3_mac ICON shown on the screenshot above, enter my password, & the following comes up. 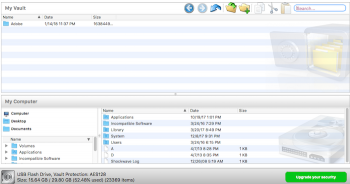 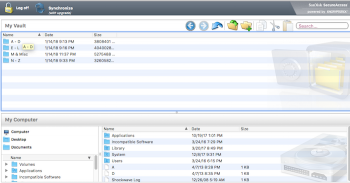 So that works great. Now to the music.

My 2012 Ford Escape has a phone/media system called SYNC by Microsoft, which includes a USB port.
I decided it would be nice to transfer all my music to USB (Approx 300 songs) for listening in the vehicle.

Here’s how I went about it. I bought another 32 GB Cruzer Glide @ Best Buy. I have exactly 20 singles on my IMAC that I purchased on iTunes.

Since it was only going to contain music, there was no need to set up a password. So the first time I put in the new drive & clicked on it, it looked just like the 1st screenshot I included above.
3 folders - One exe file - & 2 vault ICONS

I opened the folder with the 20 iTunes singles & dragged & dropped them directly into the window containing the 6 items listed above.  When they were copied, I removed the drive, took it out to my vehicle, & it worked. Next, I started on my CDs. These are all store bought. In other words, no music downloaded from Napster, Limewire, etc.

After that, I created a temp folder & began selecting & dropping songs from the Cd’s into it. Every time I’d put a new CD into the MAC, iTunes would open up & suggest that I copy all of the songs there. Since many of the CDs only contained one or two songs I wanted to copy, & I didn’t want to do that, I just closed out iTunes & double-clicked on the CD ICON until something else opened it. However it only contained the number of tracks, not the actual song names.

When I was done, I had copied about 90 more songs. I dragged them into the SanDisk window. I also made some individual folders. For instance, a George Carlin comedy CD with about 15 different tracks. All the songs play while I have the SanDisk stick plugged into my Mac, but trying to play them in the truck just turned into a total quagmire.

This is probably the key. At some point I thought that maybe the 6 items shown in the first screenshot were somehow interfering with the ability of the SYNC system to play the tracks/folders, so I highlighted & deleted them. Now, when I insert the SanDisk stick, & click on it, it’s opened by ‘finder’
Here’s a screenshot. 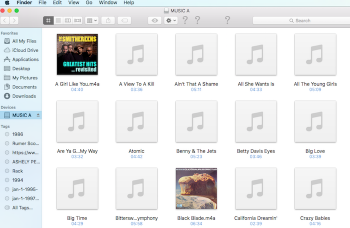 It’s pretty obvious I have things all screwed up

Would really appreciate any help/suggestions.

PS: If anyone replies to this tonight, I probably won’t be able to respond until tomorrow afternoon.