The only way to rename them is to plug the Sansa into the computer, then when you’re viewing all the files, click “Record” then “Voice” and they’re saved in that folder. You can just rename them like anything else.

Your Fuze will name each voice recording with the date followed by the time like this (101108 122945.WAV). This is pretty confusing for me, let alone for 1st graders!

You cannot simply re-name them ON the Fuze; you have to plug it into your computer. BUT (there’s always a but, isn’t there?), your Fuze has to be in MTP mode, not MSC!

If you connect in MSC mode yes, you can navigate to the RECORD > VOICE folders and your recordings will be there. Right-click on the files and select Rename. This will allow you to change the name of the file. But (there it is again) when you dis-connect from the computer and look on your Fuze, you’ll discover that as Led Zeppelin put it, “The Song Remains The Same!” The file name has not changed.

However, if you first put your Fuze in MTP mode (SETTINGS > USB Mode), then follow the same steps in renaming your voice/wav files, the name will actually change on the Fuze menu. The only thing you must remember when renaming your files is not to delete the .WAV extension or it will not work. Windows usually warns you if you try to do this however.

I do have one question though . . . you actually let your 1st-graders play with your Fuze?

Oh, I’ve never tried renaming recordings so I didn’t know that you had to be in MTP mode.

That’s what I was wondering, too! They are that careful with it?

Haha yes I do…I actually bought it for them to listen to audio books and to record themselves reading for our classroom library.  I bought a hard case for it!  Thanks for the suggestions I will have to try it out!

As you’ve discovered, MTP mode does many little things in the background.

How times have changed!  When I was a wee lad, we had open reel recorders, and when the new 3M Wollensaks were all plugged in… happy times! 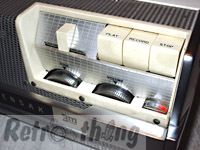 If you plan to keep recordings for a long while and have them available on the player, it would be a good idea to convert them to 32 kbps mp3 or wma files, then store them in the podcast or audiobook folder(or you could give them the genre audiobook or podcast and store them on a microSD card installed in the player. By converting them to 32 kbps mp3 or wma, they will only take up 1/12 th of the space on the player. If you don’t have a good conversion software package, you could use the Windows Audio Converter that comes installed on most PCs. On mine it won’t convert to 32 kbps mp3(the lowest setting is 128 kbps for mp3) but will allow conversion to 32 kbps WMA. Keep in mind that WMA files won’t play on an ipod. If you use 128 kbps mp3, the files are 1/3 the size of the original recording.

If you connect in MSC mode yes, you can navigate to the RECORD > VOICE folders and your recordings will be there. Right-click on the files and select Rename. This will allow you to change the name of the file. But (there it is again) when you dis-connect from the computer and look on your Fuze, you’ll discover that as Led Zeppelin put it, “The Song Remains The Same!” The file name has not changed.

That sounds like a bug to me.  Has anyone reported this behavior yet?

I’ve has my fuze for about a month. I have renamed my voice recordings before but I don’t know what mode the fuze was in, it had t be factory mode. Then one day I connected my fuze and it wasn’t recognize, i fixed that by putting it in MSC mode. Since Msc mode is the only mode my computer will recognize, how can I rename my voice recordings?

When editing any file names on the Sansa, don’t forget to delete the mtable.sys database file in the root directory.  The old file name may still be stored in there.  Upon disconnect / refresh database, the device will build a new database file.

There is in fact a bug in MTP mode that renaming files does not update the FAT, although the MTP database reflects the name change. To work around this, dont rename files directly on the FUze in MTP mode. Copy to the PC, rename them there.

We have logged this issue and will fix it when time permits.