if this isn’t the correct place, moderators are free to move this.

Here’s a photo of the ad. 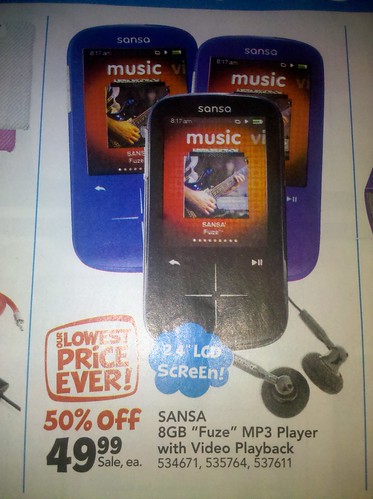 Holey Moley!!  That’s a genuinely good deal.  Hey, at that price, how can you go wrong?  The ad shows three SKUs, so I’d guess that there’s a choice of three colors, not just the blue one.

If you’ve been sitting on the fence wondering if you’d like to try the Fuze+, this is a good chance.  It’s priced at the same level as the Clip+, come to think of it.  Well, I have both, since the little Clip+ is about as portable as it gets, and the Fuze+ is a lot of fun with its large display.

The Fuze+ suffered some bad mojo when it was released, as folks (myself included) struggled a bit with the touch pad.  For those of us who have been around for a while, a wee bit of patience pays off, as firmware updates have smoothed out the wrinkles.  At first, most issues centered on the odd “lock” scheme, where the little guy unlocked at every chance, usually within a few screens of picking up the device.  Now, a brief press of the power button is all that is needed.

Especially at this price point, it’s an incredible deal.