Metal button panel and back clip?

My Sandisk Sansa Zip Clip arrived with a flat metal button interface. Just wondering what model / version this is because I have not seen it advertised anywhere. Even when I google it.

The back clip is plastic but has a brushed metal clip surface and the front buttons have a flat metal panel. Not sure what metal it is either but my guess is anodized aluminium?

this one is a special SKU that sells at costco only.

Actually, that sounds very nice. If you have a few moments and a camera handy, pictures of it would be super to see. Some of us have been suggesting Clips with metal bodies for awhile now.

Taken with my phone

Taken with my phone

Interesting! the buttons look like mine, but the clip certainly looks different from mine. Looks nice!

Now I am wondering what my blue one will look like when it gets here…lol. Remember on the Fuze and original Clip, the blue on them, that looked much nicer in person than on the computer screen? I’m hoping it is like that.

Nice looking–thanks for the pics! Could see joining Costco for that.

My Clip looks exactly the same, but I didn’t get it from Costco, I got it from a seller “BlueProton” via Amazon:

I selected “Black”, which shows a black button panel on the webpage, but got a metallic button panel and clip.

Is it really metal or “metal looking” (painted, brushed plastic with a metallic coating) ?

Is it really metal or “metal looking” (painted, brushed plastic with a metallic coating) ?

Well, my blue one arrived today, and it is actually a darker blue than in the computer pictures. The buttons on the front have that metallic look, but the clip does not. 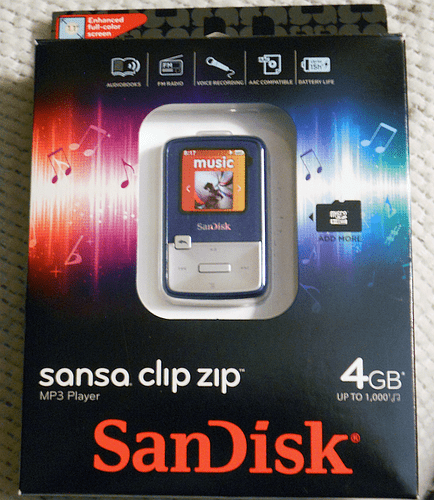 So the only difference is the metal-plated back of the clip? All the other ones I’ve seen have the metallic-looking keypad, including mine and any I’ve seen featured on websites like Amazon, SanDisk, etc.

The actual keypad appears and feels metalic. It has a more flat appearance without the grooves you can see on plastic version which is just metalic paint. The clip still has a plastic peice but the outside section has the additional metal strip stuck on it. It does feel a bit more stiffer when you press it, but that could just be the effect of pressing down on metal as oppose to plastic.

Picked up one of these at Costco yesterday ($39.99 after $15 instant rebate).  The back of the clip is definitely aluminum, the front panel pad is painted silver on a “brushed” plastic surface.  The small buttons:  on/off, volume, select, seem to be not painted surfaces but vacuum deposited metal (not paint) which should decrease wear.  The buttons appear to a bit more shiny than the originals.  The printed indication for “microsd” seems to be a brighter white.

I wonder if there are other variations?

Get 'em while you can.

Still think that SanDisk could do well with an “Olympics” metal/metal-colored line of Clips: gold, silver/platinum and bronze (different metals/colors for different capacities).

Plus, it would be nice to have some attractive cases (ok, how about even ONE?) available for the Zip line, apart from the silicones that are around and that cover the Zip’s attractiveness. Leather cases always add class . . . .