I can’t find any reference to a Class 4 version of the SanDisk 32GB Micro SDHC Card being released, yet I found a local store who is selling it.

Can anyone verify if this is real? I don’t want to fork out the cash and find out its fake - i’m hoping the model number might help verify it.

SanDisk is recently changing all the speed class in many formats, as SDHC  and microSDHC.

Regarding the microSDHC 32GB SanDisk of class-2 has been improved up to Class-4, but anyway it´s important to say that class means minimun write speed guaranteed but not máx. speed.

We did some test of benchmarking with the microSD HC 32GB Class-2 and the results were:

That proves that class-2 is about min. speed, because in this case results said that this card is a Class-4 in fact as the write speed was about 4-5 mb/S.

Most stores do have the microSD 32GB class-2 in stock, and the Class-4 is more easy to find at specialised stores.

Here are the photos:

And this is the Class-4 version with the new smaller blister:

Thank you, i appreciate the detailed responce. I’m going to order the card now.

It would be interesting to see what the benchmark results are for the Class-4 and compare it to the Class-2.

I find it strange though that the SanDisk website has no reference to the newer Class-4. Mostly because it makes it difficult to verify whether its a legimate card - other than ask on these forums. I guess there must be a lag between releasing newer/revised products and updating the website.

Thank you, i appreciate the detailed responce. I’m going to order the card now.

Wow! $159? Really? I’m sure you can finid better deals than that around on legit cards. I picked up one the day after Thanksgiving from the SanDisk store for wayyyy less than half of that! :smileyvery-happy:

I could probably order from overseas and save a lot of money however i’ve had some bad experiences purchasing memory cards. Normally I would try and find a cheaper alternative. Its seems to be a little tricky though tracking down the newer Class-4 card. Buying technology in Australia is always a rip-off.

Its seems to be a little tricky though tracking down the newer Class-4 card. Buying technology in Australia is always a rip-off.

Sorry, didn’t realize you lived in the ‘South 40’. Don’t you have any large electronic or computer stores there? Even office supply mega-stores (in the States we have OfficeMax & Office Depot for example) will sell memory cards. You may pay a litle more for them, but at least you can see what you’re getting, and have a place to return them if they’re bad.

I couldn’t find any of the larger electronic stores in Aus that stock the 32GB Class-4 yet. One store rep even argued with me over their existence. I can find the 32GB Class-2 quite cheap locally however i specifically want the Class-4 to upgrade the internal Micro SD card in my HTC Windows Phone 7.

It would be interesting to see what the benchmark results are for the Class-4 and compare it to the Class-2.

I found this TestFreaks  ATTO Benchmark test of a Kingston microsdhc 32gb Class 4 card interesting.  The write speed is about the same for my Sandisk card.  I used H2testw for my test.

I’ve noticed that in comparing the write speeds for my Sandisk cards, the lower capacity, class 2 card is higher in write speed, oddly enough.

Hi!  I have a much similar question as the original poster.  It pertains to this listing on Ebay:

I compared (carefully) the picture in this ad to the picture that was so kindly posted in the second post, and they differ quite signficantly.  The Ebay seller is a member in good standing with a good feedback rating - what is giving me pause is that ALL of the other ones of these sold are marked as Private listings.  Seems odd.

Is this a good bet?  Or, do you think that these could be fakes?  Is there any way to tell before purchasing?  That is, could I request some additional information from the seller to confirm?

Thank you in advance for your reply!

Can you guarantee the picture posted is of the exact card you’ll be getting?

Can you guarantee the seller will be honest with you should you ask for more information?

Would I trust this seller given that he’s in Hong Kong and after reading the negative feedback comments that he doesn’t respond to customer complaints?

I don’t think so.

You should be able to find a good price on this card from a reputable dealer elsewhere (not on eBay). You may pay a bit more, but say you buy this card . . . it’s fake  . . .  and you can’t get the seller to respond or replace the card. You’re out $55! What kind of value is that?

EBay is a good place to buy some things. I use it quite a bit. But given the number of fake memory cards being sold on there in the last year or so I would look elsewhere for that product.

My advice to the other user is NOT TO BUY SanDisk cards from China,  we have bought some in the past to make tests and for show to the people how to check and see the differences between counterfeits and genine cards. We made benchmarking tests and use the Crystaldiskmark and H2testw , and the results were than some of those cards were hacked cards, and have 4GB instead 16Gb or 32GB. In other cases were microSD cards “labelled as SanDisk” that had 32Gb but they were not SanDisk.

There are some sellers that use to sell SanDisk cards in “bulk” format, that means without the SanDisk retail blister, and those cards are cheaper than the blistered ones. The thing is that all the people who buy the cards in “bulk” dont have the guarantee as they are buying the original. SanDisk only sell cards in “bulk” to the mobile operators and manufacturers of mobile devices, as Nokia, HTC, Samsung, as they can include these cards in its mobile packages when selling their unlocked phones,etc… In the rest of cases as far as i know SanDisk will not distribute in bulk to end users.

We have detected sellers who sell the microSD 32GB original but using fake packages, in such case SanDisk will not give warrany to those products as they told us when we reported this case. I saw in the past a buyer complaining in these forums regarding a microSD 32GB bought on Amazon , the card had serial number printed on the front, the card had 32GB but the blister was a cheap fake, SanDisk answered they do not provide guarantee of that card.

In Hong Kong you can find the microSD 32GB around 40-50 USD, most of them are in bulk and they don´t have any guarantee in Europe or USA, is like playing the “russian roulette” you can buy from China and cross fingers, maybe you are lucky and have the genuine one.

Another thing is to check the back of the blister and see the part number of the card,

My advive is to buy these high capacity cards from trusted sellers and check the country origin so you can be sure that your card will have the SanDisk warranty in your country. In case of problems you will have to return the card to the chinese seller as SanDisk will not assume or open a RMA if the card has not been sold in the authorized market.

If you think the card you found on eBay could be a fake, just send an email to brandprotection@sandisk.com with the item number and direct link to the listing.

SanDisk is a member of VeRO program on eBay, that means they can remove inmediately all the SanDisk products they suspect are counterfeits.

Hope this can help to the other user.

I just bought one from DailySteals for $24. I hope it is worth it.:manvery-happy:

I hope it’s not fake!

If a deal seems too good to be true (and this one does), it ususally is.

For your information, the microSDHC 32GB Class-4 card details is:

My opinion is that maybe that seller sells “bulk” cards or just microSD from other manufacturers.

You can find this card on Amazon (class-2) in bulk format at 25-35 GBP, but you will never know if card is used or refurbished.

You can see a picture of the original card microSD 32GB class-4 from SanDisk:

Look at the words below “32GB” , the genuine SanDisk card must have the S/N and “made in China” printed on the front.

If your card do not have these words is 100% a counterfeit.

Do these speeds seem about right? i am little dissapointed with the write speeds? as that is mainly why i wanted higher class card,  thought they might have been quicker? Do you think that there could be something wrong with either the microSDHC Card or my Sandisk USB 3.0 Imagmate? I also have a Samsung 32GB Class 10 MicroSDHC card and will run the test again with that card to see the difference.

FYI, SanDisk did not launch any microSD Ultra in 32GB format. If you bought the microSD “standar” Class-4 your results are ok, look to the write speed, 4.739 MB/s, if the card is a standar class-4 it´s normal.

The former SanDisk microSD Ultra were class-4 and capacities from 4 to 16GB,  the 32GB version never was lauched in the class-4 format.

We have received the microSD Ultra Class-6 (30MB/s)  in 8GB and 16GB, the 32GB version will arrive by mid Dec. 2011 .We will make a video and benchmarking test of these new cards shortly using the new Imagemate USB 3.0

You can see the SanDisk presentation video of these new cards:

That’s great news, Memoryval! I look forward to seeing how the cards perform in USB 3.0 compared with my own tests using just USB 2.0. Maybe you could also perform the same benchmark with USB 2.0 to show people the kind of improvement they can expect when they upgrade to USB 3.0 and UHS capable readers.

No wonder Sandisk Class 4 cards are going quite cheap nowadays, i expect these new microSD HC Ultra “bi-colored” card’s will start to become the norm although might take a while tho? i think from now on i will only invest in Ultra’s for the improved read and write speed, for me class 4 doesn’t cut it. If those numbers u have given are correct then the Sandisk Ultra’s should outperform (albeit not by much) Samsung’s Class 10 which have a max read 24MB/S and max write 13MB/S. Are the Sandisk Ultra’s completely compatible with all existing MicroSDHC devices as well as the newer MicroSDXC devices? I did notice however that its states upto, so whether you actually achieve those max read and write speeds is debateable. I’m gonna stick with my Samsung Class 10 for now but would be interested in those benchmark tests for the Ultra Cards.

Hi there! Any news yet on these USB 3.0 speed benchmark tests on the new “bi-colored” MicroSDHC cards?

From my side I can provide the test results I obtained using the USB 2.0 MobileMate Micro reader:

I’m posting the results of the fastest card I own so far, an 8GB Sandisk MicroSDHC Mobile Ultra Class 6 from December 2008, which in my experience reaches the maximum this reader model can deliver and a brand new 16GB Sandisk MicroSDHC Class 6, UHS-I bi-colored. The benchmark program is ATTO Disk Benchmark v2.47. 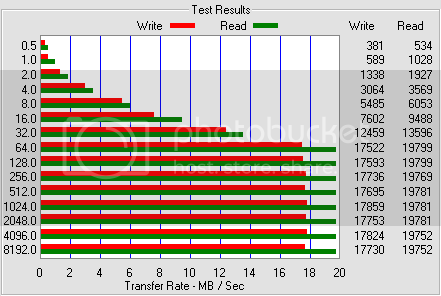 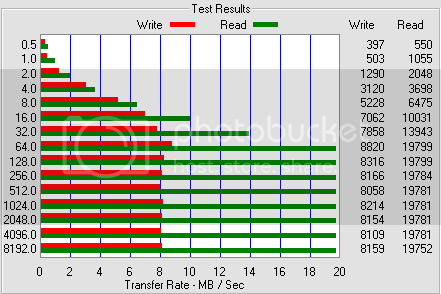