How to know which SanDisk flash drives use MLC NAND, and which use TLC?? - via ChipGenius software?

I am getting ready to buy a large number of larger-sized USB drives (128gb, 256gb, or both). These drives are going to see constant write cycles, and so the better endurance and more consistent write capability of MLC NAND is desirable over TLC. This is a long term investment, and I feel a premium MLC product will be better in the long run.

I would like to figure out which SanDisk premium flash drives use MLC NAND versus which ones use TLC NAND. Thus far, I have been unable to find clarification directly from SanDisk, so the best solution to this appears to be an application called ChipGenius. (I tried Speccy but no-go.)

as far as i know all the usb flash drives from Sandisk use a MLC flash storage inside.

of course you can try to ask the support directly to see what they are actually using inside:

Most all retail USB dries are TLC for the low end and MLC for the higher end. That said for a write intensive application you would not want to use retail USB drives. you should look at industrial grade or OEM products.

MLC is relatively rare with flash drives. The only makers that fully disclose their use of MLC on flash drives is Transcend (who makes 1 MLC drive) and Mushkin (who makes 3 MLC drives.) It seems many makers are heading in the direction of using TLC + a tweaked controller as opposed to MLC or SLC. While that can improve TLC’s endurance, it’s still going to be inferior to MLC.

The reason I am so set on purchasing MLC only is because I have found a greater real-world difference than benchmarks would suggest. For example, with SD cards, the MLC-based Samsung PRO+ can hold a sustained write speed in the area of 100 MB/s, and it can do this with real world usage and not only via a benchmark program. That puts most enterprise offerings to shame. I started with the TLC-based Samsung EVO microSD cards, but was unhappy with the write speed, so I changed to the PRO SD card. In regards to real world performance via my individual workload, my MLC PRO SD cards write 10-20x faster than the TLC EVO…so it’s a nice productivity bump for my needs.

As the PRO SD card is using Samsung’s tier 1 MLC NAND, I’m comfortable saying it will have extreme endurance just like SanDisk’s MLC products…after all, an endurance test using a 256gb Samsung PRO SSD [the previous generation of Samsung’s MLC] was able to write over 2.2 Petabytes  prior to its death…and the current generation Samsung MLC has greater endurance than that generation. So ideally I want to be in the direction of that extreme endurance.

The outcome of this inquiry has been dissapointing. SanDisk seems to have taken great effort to avoid this information from being disclosed or discovered. Quite a few consumers, and virtually all IT managers, are well aware of the inferior longevity of TLC-based (i.e., 3-bit and 4-bit) NAND products as opposed to 2-bit MLC, 2-bit eMLC, or single-bit SLC. The type of NAND is a huge detail.

The drives we sampled from: Transcend, Mushkin, Samsung, Silicon Power, Corsair, and AData all either disclosed what NAND they were using, and/or did not lock down their drives to prevent users from pulling this info from a program such as ChipGenius or USBFlashInfo.  ALL of these companies are producing one of more MLC-based flash drive that is both affordable and well reviewed. In the case of SanDisk, they do not disclose this information, and they have even taken this a step further to block access to this information so that we cannot use a third party program to obtain it. As far as I can tell, SanDisk also does not disclose flash drive endurance statistics.

What does this mean?

Even without factory-published endurance statistics (which are relatively rare for flash drives), knowing the controller and NAND specifics helps form a reasonably good idea of what to expect from a specific flash drive. So why has SanDisk taken such extreme action to prevent anyone from finding this info out?

Even if a huge portion of SanDisk offerings use TLC, it seems almost certain that their flagship flash drives and SD cards use premium MLC. But without being able to verify this, all you can do is take the better-safe-than-sorry assumption that everything (all the way up to the 128gb Extreme Pro) uses lesser TLC NAND.

If SanDisk thinks this is good for business, I disagree 100%. We liked the Extreme Pro flash drive quite a lot, but, unable to verify such an important detail, the winner is the Muskin Ventura and Impact models (which use Toshiba MLC NAND.) I sincerely hope in the future that we see this practice change. 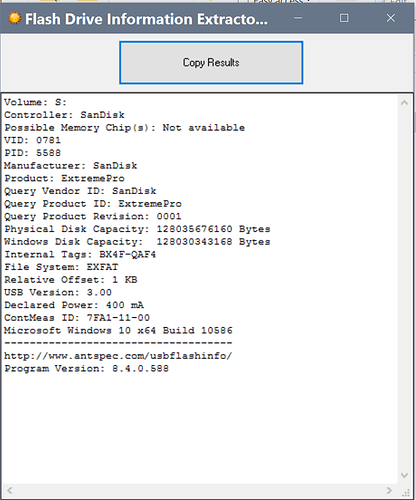