New to the forums and wanted to share my experience with my Sandisk. I purchased the E260 in 2006 and it has had quite a life, I managed to brick it once and I brought it back to life. I later installed Rockbox on it and though I prefer the stock UI, I much prefer the extra SD storage recognition that Rockbox gives me.
A couple years ago I put a new battery in it even though the old battery still had sufficient run time, that is all that I had to do to it in the 16 years of ownership, that is until yesterday.
Yesterday, I developed a wheel issue where it became way to sensitive and would not always do what you want it to do, for example, adjusting the volume one way would make the volume go the other way. I am no electronics expert but I am handy so I took it apart to see if I could determine the issue, nothing stood out to me so I decided to take a chance and spray under the wheel with some deoxit (not even knowing if I was using the correct product) but that is all I had in my home. I put everything back together and lo and behold the wheel was back to normal, BUT, I noticed that some of the Deoxit left some oily marks on the display. I had to take it back apart a couple times to clean the screen and the plastic film that the Deoxit flowed between. After the couple of cleanings, the display is back to normal.
The old player does not see much use these days because I prefer using my phone for its superior dac chip but every now and again I fire the Sansa up and try not to think about the year 2006, it was not a good year but at least the E260 still works great. 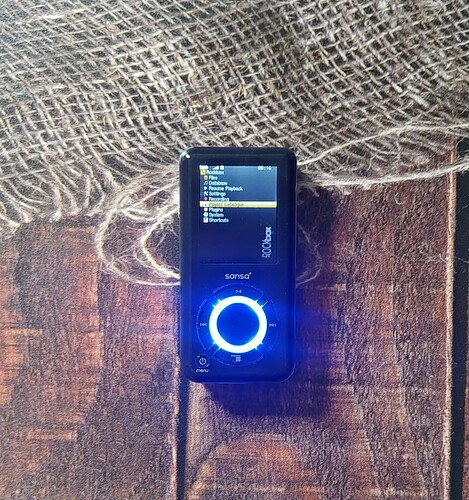 We appreciate your valuable feedback. We would love to hear from you in future and have reviews from you so that we can make the quality of our products better as per user experience

Thanks Keerti_01, anything that I can do to be of help will be my pleasure. Feel free to PM or email me anytime.

same
bought mine in 2008 and still using it
the only problem I’ve had is lately the clock capacitor started leaking, it looks like a button cell battery but it’s really a supercapacitor so I replaced it with a fresh 2.5v/220mf one now my sansa holds the time/date again, I love my sansa

Hello, Would it be okay to ask, where have you found this supercapacitor? My e260 has the same issue, the supercapacitor is leaking. I’m having problems finding the one which would fit into housing.
Even worse, I unsoldered the supercapacitor (thinking its just a button battery) and lost it and have no reference now.
Help would be appreciated.

If you receive an answer, let me know as I would like to buy one too to keep my E260 going strong.
I did a search but cannot find one in the values that was mentioned.

By any chance, have you had your e260 opened? May be useful to know what is written on this super capacitor, might be easier to find it this way. For now I will try to get 3v battery to see if this works, will take some time to arrive though.

I had it opened but I only repaired what was wrong and never thought about checking the capacitor, I might take it apart again and if I do I will let you know if anything is written on it.

Might have fount it. Its called DCK-3R3E224U-E. Its 0.22F 3.3VF capacitor, branded by ELNA bought it on Aliexpress.
It arrived not long ago. Soldered it in and the mp3 seem to be holding its clock again. Will test it out further and update this post if anything happens. I hope this would be useful to someone.