Good evening, I have a question and after many searches and countless look up I still cannot find a definite answer. I have a San disk Fuze MP3 player with Rhapsody subscription service. I would like to play this in my car, however I only have a USB connection. If I tell the player to run in MTC mode it I cannot use the subscription tracks. I was thinking maybe I could use this http://www.amazon.com/i-Trek-YS-AUC-…pr_product_top and or maybe this http://www.buy.com/prod/gtmax-usb-2-0-to-3-5mm-microphone-speaker-audio-sound-card-adapter/q/sellerid/29345858/loc/111/213812694.html   simply plug an aux cable into the MP3 player and the USB to the stereo. I have seen some cables off of google that have USB 2.0 to 3.5 mm connection but there not converters like this. I know USB is digital and 3.5 is analog. Any information on how to play the MP3 in the car would be greatly appreciated. FM transmittier would probably out of the question as I am moving to Los Angelos. Thank you in advance. *note* I know about mass storage devices but would love to use the mp3 player. The Cd player I use is a Pioneer Premium FT8000BT. Thank you for any info.

The problem with going from the audio output of your Sansa, to a digital output via USB, is that the car stereo is being tasked to do something that it wasn’t designed for.

A computer (laptop or desk PC) can address the listed devices as a secondary sound “card”.  Improvements in devices have made it possible to shrink the former “card” into a device the size of a USB plug, pretty amazing.

The car stereo is looking for something that the little device cannot (as built) provide, a readable audiofile, like an mp3 or wma file, that the stereo can pass on to its digital-to-analog converter.  The car stereo is advanced, but not as “smart” as a PC that can install drivers (software that tells the computer what to do with the device).

This limitation is simpler in your case: the Rhapsody music files, at least the subscription ones, are protected media.  Using the Windows Media DRM scheme (WMDRM-10), you can “authorize” the Sansa to play the files shared with your home PC; this is the way it was designed.  We cannot “authorize” the outboard car stereo as a media device like the Sansa, as it’s mounted in the vehicle.  Yes, it may be possible to do so, with a little careful engineering.

In my theoretical car stereo, you could have a removable head (common today), with a hard USB connection point to your PC, and then we could simply authorize the device, sharing its unique ID information with the host PC.  This could even be done via software, having a USB dongle that is keyed to the car stereo, and the license data could then be transferred when the dongle is plugged in to the car stereo.  This hasn’t been done, to the best of my knowledge.

The car stereo simply wants “naked” mp3 files in most cases.  To accept wma or AAC files, well, same goes for mp3 actually, a license fee is involved as in all devices.  To have WMDRM capability, I am just guessing here, the requisite MTP engine would have to be licensed from Microsoft, as the car stereo would have a portable Windows-esque operating system, at least a module from the OS, installed.  In the case of this adaptor you linked to, the car stereo lacks an adequate operating system to handle the driving of the device.

Personally, I would recommend transferring basic mp3 files via a USB flash drive, I really like these guys, as they are very small indeed, and I don’t recommend leaving “pokey things” sticking out from your dashboard when the vehicle is in motion.  With any USB device that pluge in to the face of a car stereo, it’s best to transfer the media to the onboard hard drive of the stereo, which is both more convenient, and safer.

Look at this wee beastie: 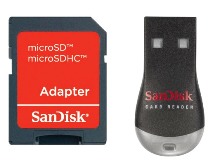 The SanDisk MobileMate USB adaptor, on the right (the full size SD is here for scale, though approximate- the USB adaptor is actually the same height as the SD card).  Using one of these little guys, you can swap files from your Sansa via the little microSD card within.  Note, the car stereo can only decode files in unprotected form, and typically these must be in the root directory of the card.

How about a bit of simplicity then?  Check if your car stereo has an auxiliary input available at the rear of the unit.  These inputs are becoming quite common, and are used for things like the audio signal from a CD changer.  We can then use the analog audio output from the Sansa, which also allows ease of navigation from the device itself.  I really like self-contained FM transmitters, like the TransCast device from Philips, but there are countless others out there.  The latter device is slightly bigger than a Sansa Clip, and I pop it in my pocket to listen to BBC News podcasts when I go for a little drive.  Your overall performance will vary widely depending upon many factors. like the antenna arrangement in the vehicle.

Perhaps I should mention some detail about FM transmitters, as performance descriptions run the full gamut from &^#$@ to musical bliss.  There are two families of transmitter, those that tap into the antenna cable, and passive devices that are received by the vehicles external antenna.  The ones that tap into the antenna cable modulate the signal to the FM band, and interrupt the incoming signals.  This type has the nasty habit of crappy performance whn the device is powered off, and you are seeking an FM or AM signal from the aether.  Portable ones fit my personal preference, an I like self-powered ones as they have no clutter factor.

Awsome feed back thanks, I wouldn’t mind the FM transmitter if I new the quality was going to as good as Aux connection or USB. I do have a Aux connection in the rear (didn’t want to take out the dash to get to it) so I was lookign for another method. To bad there is not a FM transmitter that would shoot from the device straight to the head unit ignoring FM principles and Radio waves  that would be nice. I guess I will just have to stick to Thumb drives until someone can make a FM transmitter that can play lossless (or close to it) playback. By the way how does your BBC broad cast sound? more cd quality or more radio? Is this a heavily populated area. Thank for any more feed back. I posted this question on five boards and you are the first to reply at all. So thumbs up

I have found that quite a few of the latest models of vehicles employ in-glass antennae, the best ones employ several with a differential-signal system that chooses the best one.  Entering several cars, the guys are amazed at how clean the sound is. I would rate the sound quality of the local Sansa broadcast as cleaner than the terrestrial FM signals here.

Check with the technical specifications for your head unit, and look into an OEM type aux adapter.  The net result is worth the effort.  For the mean time, you can enjoy your Rhapsody subscription with a wee gadget, great results for a device that costs the same as a case of beer.  (Beer has gotten expensive, hasn’t it?  I haven’t purchased “mass quantities” in 20 years.)

Down the road (pardon the pun) you can remove the head unit for a more permanent fix, or if your luck is anything like mine, it will be time for a new head unit in a year or so anyway.  I have seen some real horror scenes behind the dash, owing mostly to the stereo shop mentality of hiring some pimply kid to cram those radios in there for a pittance.  Lots of quick connects and gobs of electrical tape, gnarling up a nice factory wiring harness.