I listen to Audiobook mainly, not music. The ear buds hurt my ears so I purchased headphones. I copy CD’s from my computer to Microsoft Player 10.0 in MP3 format, then upload them to the Sansa Unit. I cannot get enough volumn to hear easily. The volumn setting in “Settings” is on high. How can I increase the volumn? Is ther a headphone unit that will give me a volumn increase? The headphone I am using is from Radio Shack and can adjust levels. It is on high and still not good enough. IN the car, through the car audio system, everything is load enough.

I just changed this unit from the 4GB unit to the 8GB unit because of this problem.

Check the specifications of those new headphones.  The two categories we are interested in are impedance in ohms, and sensitivity , which will be expressed in terms of dB versus mW power.

As compact as the Fuze is, having a high powered output really limits the amount of playback time, as it’s a split between the display and the amplifier for power.

Many users have found headphone amplifiers that work well with the less-efficient headphones.  Having a full-size headphone can be a welcome break from earbuds ir in-ear (canal) phones.

A software solution is to tag the MP3s with a ReplayGain value, using something like WinAmp. Then, in the Fuze’s Music Option, select ReplayGain “Song” mode, and increase Pre-Gain to max value (which on mine is 12 dB).

You can increase this further with a MP3Tag script that adds a specified dB amount to each MP3’s RG value.

“As compact as the Fuze is, having a high powered output really limits the amount of playback time, as it’s a split between the display and the amplifier for power.”

Many of us would be happier with a player that has a much larger battery and is up to twice as thick as the Fuze if it has higher power output and much longer battery life. I noticed one player that has an 1800 mah Lion battery, has peak power output of over 100 mw/channel(into 16 ohms), and over 100 hour battery life. It has no radio, a micro SDHC card slot, and no equilizer though, and just a 1" screen. A player could probably be made with a 2"  monochrome lcd screen, fm radio, a card slot, and equilizer, and still have high power output and very long battery life if it is around double the thickness of the Fuze. While having a thinner player is preferable, imo it isn’t really worth it if power output and battery life suffer too much as a result. Imo the main thing is that the player should still be able to fit into a typical shirt pocket.

“Many users have found headphone amplifiers that work well with the less-efficient headphones.”

The Boostaroo is a little bigger than two AA batteries.

If you’re good with a soldering iron you can put a Cmoy amp inside an Altoids box. Look around Google for Cmoy  kits, or eBay for built ones.

I don’t want to have an en external battery pack and external headphone amp connected to my player. That is rather cumbersome. I don’t know about the sound quality of the Fiio E3, but have heard people say that the Boosteroo should be avoided.

I have used IEMs (Shure), small portable phones (Sennheiser, Koss) and even big ol’ circumaural phones (Grado) with the Fuze and I can hear just fine. Maybe the OP’s phones are just highly inefficient. Since audiobooks don’t need the broad-spectrum fidelity of music, there are lots of low-priced alternatives.

Take your pick from here–just as an example–and look under specs for Impedance under 32 ohms.

And JK98, I have to disagree. I wouldn’t want a fat Fuze. It has battery life to go all day and recharge in the few moments I sleep.

JK98 wrote:
I don’t want to have an en external battery pack and external headphone amp connected to my player. That is rather cumbersome. I don’t know about the sound quality of the Fiio E3, but have heard people say that the Boosteroo should be avoided.

I have one, and rechargable AAA’s, but I rarely use it anymore because my current players really don’t need it. But it worked nicely with Sansa players and Koss KSC75 and Grado SR60i headphones, and it was cheap to boot.

I guess everyone is different. Some people don’t mind battery life of 12 hours or 20 hours, while others want much more battery life, even if it means the player is twice as thick.

The Fiio E5 is even smaller, with a rechargeable battery and adjustable volume control. It’s not a revelation, but it does give a little boost.

"On small size vs longer batt life: Small size will win out every time, as it’s easier to sell a smaller MP3 player than it is to tout one with long battery life. "

“Speaking of selling, I’m surprised that the Fuze hasn’t had a replacement already. It’s been on the market for a couple of years now.”

The Fuze is still competative with other players, while the View is older and much more outdated than the Fuze. I would like to see a replacement for the View well before a replacement for the Fuze. Sandisk needs a high capacity player with a large screen that is good at playing video as well as music. I hope such a player has a full sized SDXC card slot, AM/FM HD radio,  at least 50 hour play time for music, and a touch screen that is at least 3".

Imo the Fuze might be replaced with an updated version that is very similar to it, somewhat like the Clip+ that replacing the Clip.

I really like the E5 amplifier for big 'phones.  It’s very slim, and has a bass boost position too: 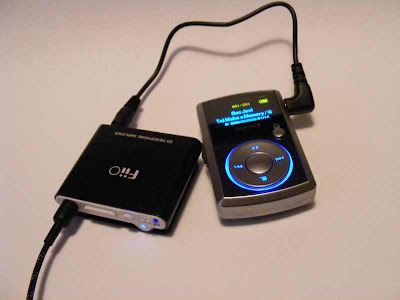 I agree, a thicker Sansa Fuze with a big bwana battery would be great, especially with the ever-increasing µSDHC capability. A bigger battery makes increasing the gain a natural upgrade; with more capacity it won’t be a detraction from the overall product.

Come to think of it, I really like the aluminum casing on the E5…if the Sansa had a similar frame, Bob’s your uncle!

…if the Sansa had a similar frame, Bob’s your uncle!

Hopefully not THIS uncle: Although hangin’ all over Miss Funicello wouldn’t be all _ that _ bad!

Have just purchased the Fuze 8Gb, and although I like the player enormously I’m less than happy that it doesn’t have enough power to drive adequately a pair of classic Sennheisers HD-201s (only 24 ohm), yet a Shuffle or £15 Flash-stick player does! So my only options are to buy 16 ohm headphones, unless I can be sure that anything with a higher-rating than that will suit the Fuze, or spend money on a bulky amplfier! Very, very disappointing, SanDisk… you should be able to do better than this.